Based on "The Case of the Missing Lobsters" by Dr. Jeffrey Polovina, chief scientist of the Ecosystem and Oceanography Division at the NOAA Pacific Islands Fisheries Science Center.

Based on her story he examined the files of birds and found out the fact that the decline of seabird reproduction success preceded the decline in lobster catches by three or four years. But he wondered why there were time lag between the success rate and the lobster catch, in addition to that why the number of their prey was declined at first. He needed further information for explanation.

May be Monk Seal

Either directly or indirectly

Phytoplankton is the microscopic plant. It floats near the ocean surface and sustains almost all life of oceanic animals at the base of the food chain. For that reason the numbers of the reef fishes depends on the quantity of phytoplankton which can be observed from space. The sensor of the satellite picks up the light reflected from the chlorophyll in the phytoplankton.

The result from Ed DeMartini showed that the numbers of the most species of coral reef have dropped 30 percent from what they were in the early 1980s. In the meantime Dr. Polovina found presumable suspect during the conference on climate change and northern fish population. The Aleutian low pressure system is the one.

The opposite is more likely 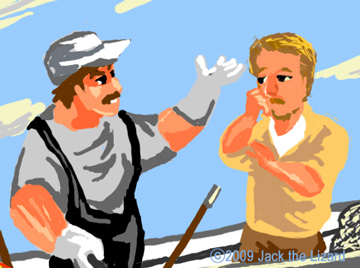 He went back to the lobstermen.
The commercial lobster fishery had only been in operation since 1980, when lobsters were plentiful. After learning that abnormal climate affected ocean in the early 1980s, Dr. Polovina convinced that the opposite is more likely. As the population of lobsters returned only usual level, poor catches in the 1989 and 1990 were not unusual after all.

"I have good news and bad news. Overfishing did not cause the decline in lobster catches. That is the good news. The bad news is that, unless the Aleutian low strengthened again, lobster catches remain poor," he said.

Dr. Polovina solved the lobster mystery with help of several experts surround him. Furthermore he leaned the intricate balance between marine ecosystem and climate during this investigation.

The Aleutian low has not changed from the 1990s to the present. The lobster fishery in the Northwestern Hawaiian Islands has closed in 2000 and remained close since then.