Here they come!
The Loggerhead Turtles were born in Nagoya.

Port of Nagoya Aquarium is only the place where the breeding of loggerhead turtle is successful in Japan. The aquarium has led protection programs of the Loggerhead turtles. Artificial beach was prepared for the turtles for nesting in the aquarium. It took time for the sea turtle to start using the beach for nesting. Division Manager of turtle, Takashi Kasugai has watched the turtles since 1993 when the aquarium opened. "The turtles did not lay any eggs for the first 2 years. We made the beach very carefully, but forget about laying eggs, they even did not come up there", he said. His team changed the temperature of water and sand to get them to be in lay. After all the challenge, he found that it was better to leave them alone.

The team had kept watching the turtles to study. "The turtle was more delicate than what I had in mind. Turtles change their behaviour if there are people watching. So we kept distant to watch, then the turtle crawled up to the beach to lay eggs", said he. He also found a very important fact that the turtle often watched the condition and position of the beach before they come up from water. It is not easy and very challenging for human to create the good environment for turtle.

It is said that turtles do not recognize each person, but many turtles came closer when Kasugai approached to the tank.

Technology helps to watch the eggs glow in the female turtles now. It is possible to guess exactly when the female turtle come up to sand for laying now. But sometimes the turtle return to water without nesting. You are very lucky if you witness them on the beach.

Port of Nagoya Aquarium opens the workshop where the visitors have opportunities to touch baby turtles every summer. "I see a lot of children who are fascinated to feel the powerful legs, and surprised to touch the shell which is still soft", said Yuya Sato, a publicity officer. He said that several events will be scheduled for children to learn about sea turtles.

Turtle Breeding Research Centre next to the aquarium is open for public and free to enter.

It was commonly understood that most of the loggerhead sea turtles in northern pacific were born in Japan. But it was unknown where the baby turtles went and how they grew up. So Port of Nagoya Aquarium, NOAA (National Oceanic and Atmospheric Administration) and HPA (Hawaii Preparatory Academy) affixed satellite tags on juvenile turtles to track them in April 2003.

The tagged turtles were from 1 to 3 years old. Their shells were sized between 20 to 60 cm. 37 of them were born in Port of Nagoya Aquarium and 6 of them had been caught by American fishing boats by accident.

The signals show the locations of the turtles, the depth in the ocean, the swimming speed in the pelagic current, and more.

So far, the research group have found that the juvenile turtles eat mollusk such as clione, jellyfish or fish eggs for 2 to 6 years where Oyashio Current and Kuroshio Current meet. Then they move east to offshore of Baja California where the turtles feed on shrimps and crabs. When they glow up, they start migration across the Pacific Ocean towards Japan. 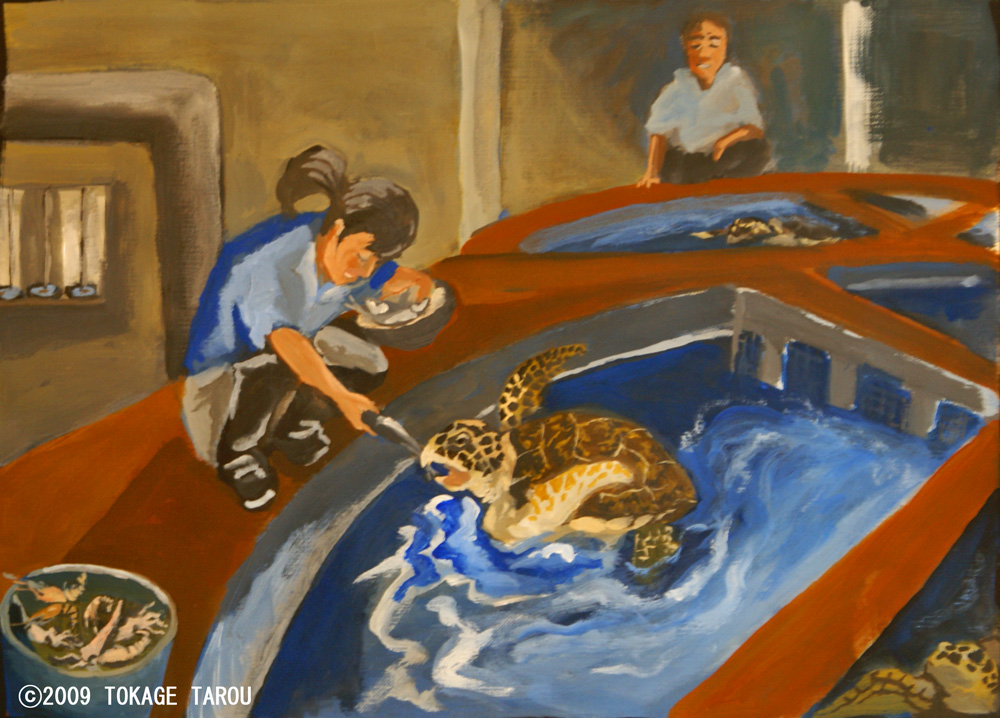 According to Saito, each of the satellite tag cost 1,000,000 yen (about US$ 11,000.-). It costs more to keep tracking the turtles. "We don't know if we will release more turtles. I think the tagged turtles have already sent us a lot of information and we can learn more about the ecology of loggerhead turtle from it", said he. 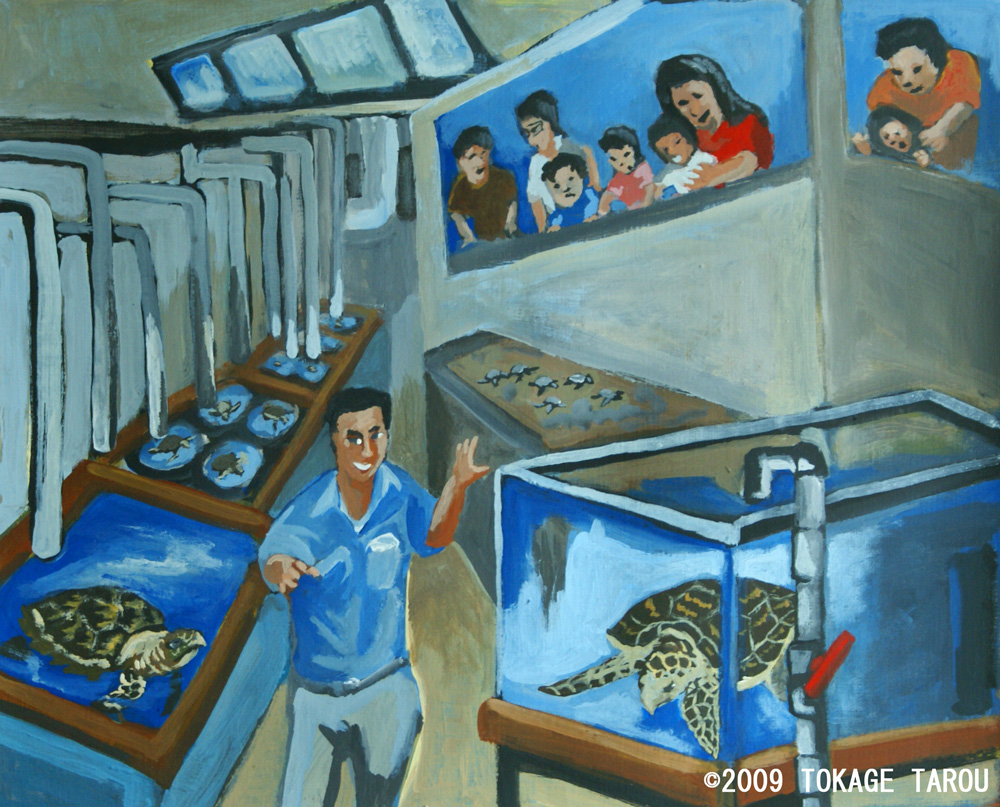 Saito talks about the turtles at the Breeding Research Centre. After a week later the baby turtles hatch, they start to feed.

By the way, why did NOAA, HPA and Port of Nagoya Aquarium started working together?

I heard about it from Dr. George Balazs of NOAA. The story is continued to NOAA. 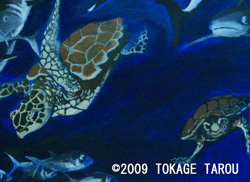